This Tuesday, November 20th, the European Institute for Innovation headed to Frankfurt, Germany to present hydrogen and its emergence—specifically the Hydrogen Transport Economy that is currently being researched, developed and supported in the North Sea Region (NSR) through the five-year EU-funded project, HyTrEc2 (Hydrogen Transport Economy—2). The HyTrEc2 project brings together eight organisations with an interest or experience in H2 to collaborate on the development of a strategy and initiatives to support the further use of Hydrogen Fuel Cell Electric Vehicles (FCEVs) in the NSR. 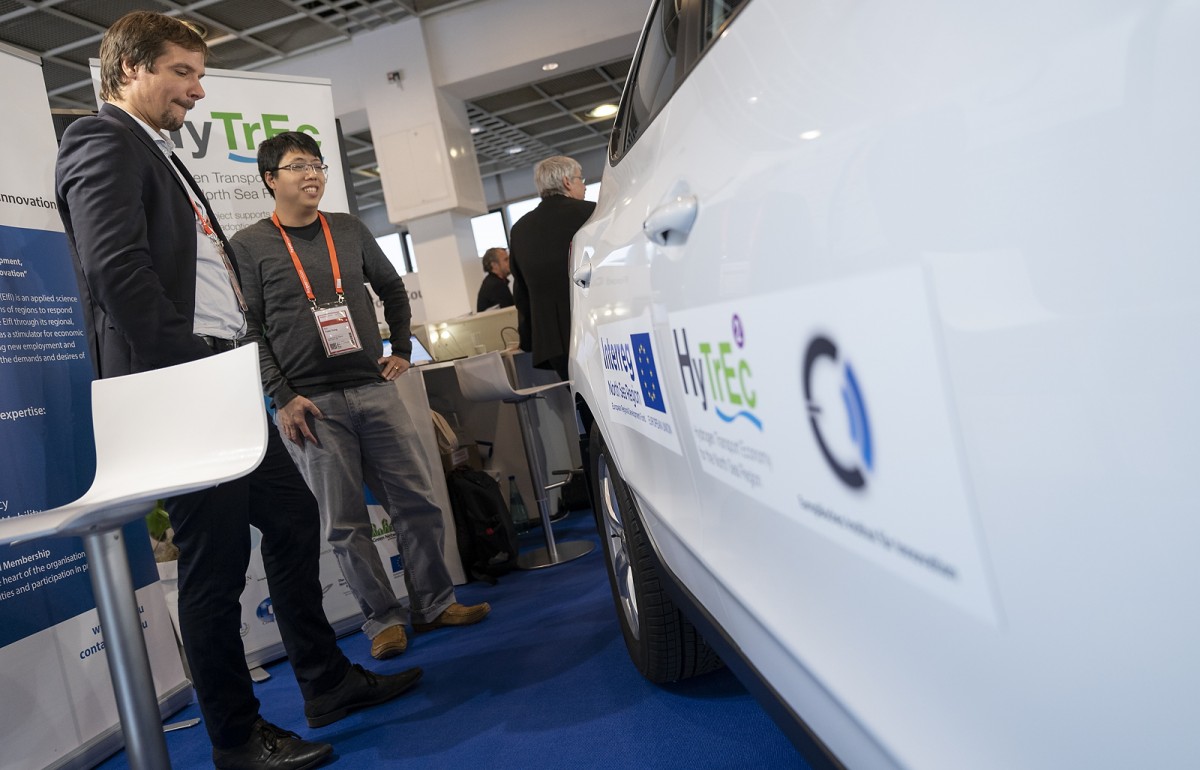 Hypermotion 2018 is an annual conference focused on transport and logistics, and features an interactive fair, exciting conferences and the Hypermotion-Lab as an arena for start-ups, future innovators and established entrepreneurs experienced in mobility. With more than 2,900 visitors, participants and exhibitors move seamlessly between the topics of the fair: traffic, mobility, logistics, Supply Chain Management and infrastructures. The ERDF EU-funded HyTrEc2 project was presented within the Hypermotion 2018, as well as part of the joint EnergyTube and EIfI booth.

Madeline Langlois of the European Institute for Innovation (EIfI) represented the EU-funded HyTrEc2 project with her presentation on interregional cooperation and work HyTrEc2 partners are undertaking across the North Sea Region. Some highlights from the presentation included an overview of the HyTrEc2 objectives and projected outputs, in addition to current retrofitting projects of van and truck fleets to become more efficient and green through Hydrogen fuel cell technology. Of significant interest to the audience was the discussion on HyTrEc2’s work with green hydrogen production, storage and distribution in Aberdeen (Scotland, UK) and Groningen (Netherlands)—specifically via small-scale wind and solar energy. 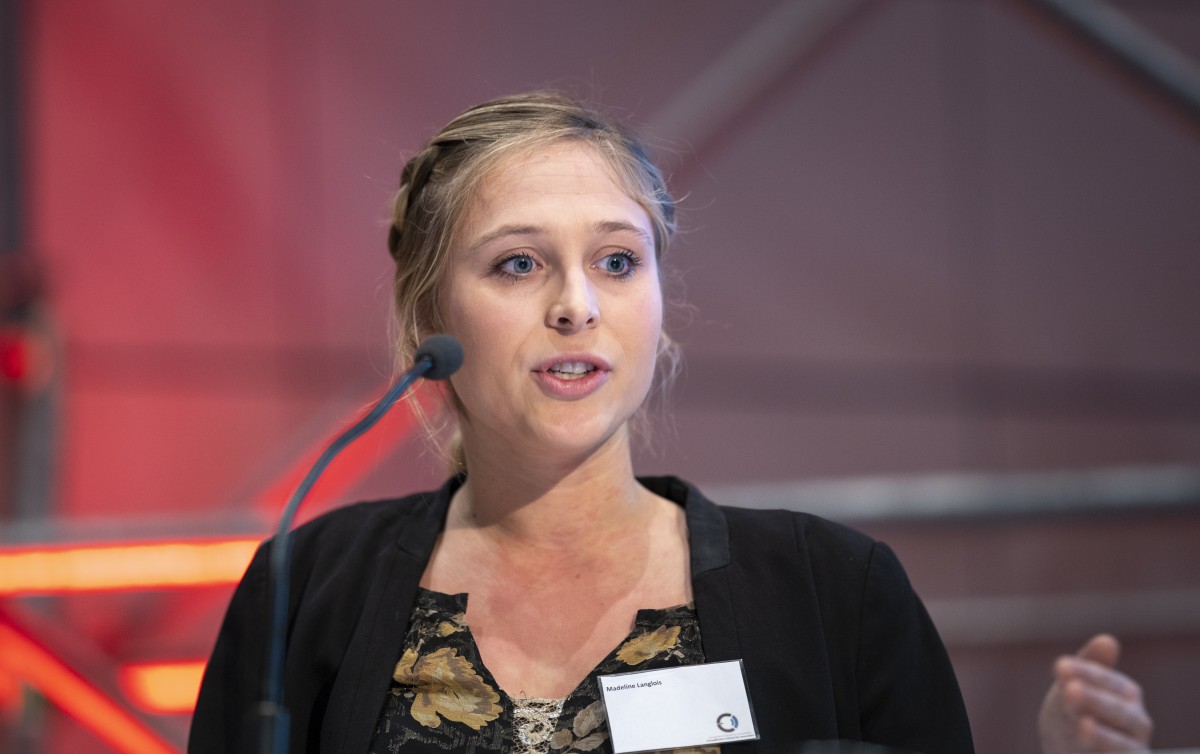 Of course, the main goal of the EIfI’s HyTrEc2 presentation was not lost on the audience. Some important visions and goals—such as those relating to health, environment, sustainable energy, establishing and developing an entire hydrogen transport economy in the North Sea Region—are too large and complex for any one local government or even region to accomplish alone. Through established pan-European partnerships and interregional cooperation, the HyTrEc2 partners are well on their way towards fulfilling their ultimate vision: stimulating hydrogen fuelled transport solutions for business, for the environment, for the future, with dynamic business solutions to make hydrogen a competitive vector for the transportation sector. 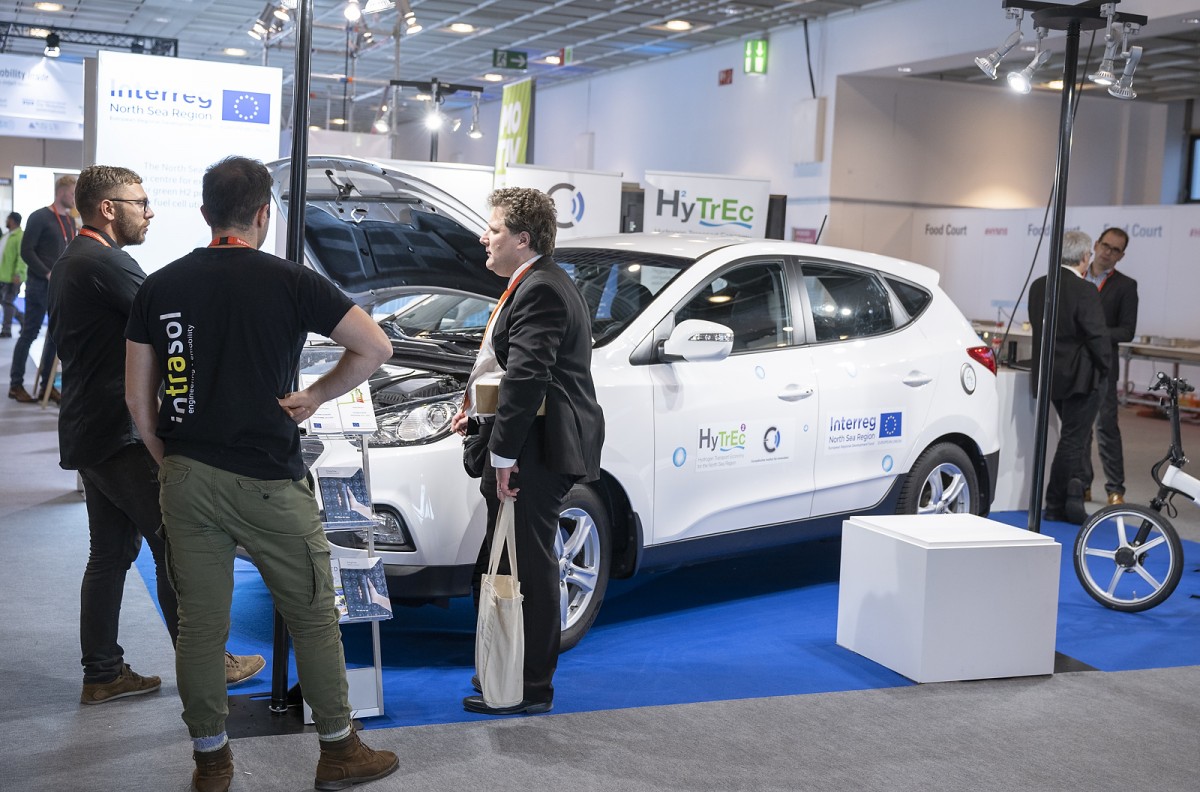 As a part of the five-year HyTrEc2 project (2016-2021), partners from the UK, Germany, the Netherlands, Sweden and Norway are working together to support the use of Hydrogen in the transport and energy sectors in the North Sea Region (NSR). Through interregional cooperation, HyTrEc2 explores and creates conditions so that a Hydrogen Fuel Cell Electric Vehicle (FCEV) market can develop in the NSR and beyond, providing a platform for collaborative development of strategies and initiatives that will inform and shape the development of infrastructure, technology and skills.

HyTrEc2 is of the Interreg VB North Sea Programme Region Programme and is partly funded by the European Regional Development Fund (ERDF). Total project funding amounts to over € 5.2 Million, half of which is co-financed by the ERDF. For details on project meetings, news updates and so on, please visit our HyTrEc2 Interreg NSR Project website.

Sorry, the comment form is closed at this time.